Posts and videos on social media are going viral these days at the blink of an eye and Ethan Lindenberger is a perfect example of it. He went on a popular social media site, Reddit to ask users the age at which he can get vaccinations done without taking his parent’s consent. He learned that he could do that after the age of 18 and he did get vaccinated now with 5 of them. 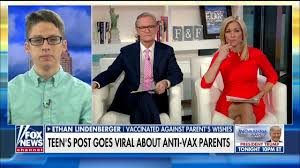 However, along with the inquiry post, he also mentioned that his mother was against vaccination and wasn’t allowing him to get it done. This was not received by the people who read the post and they expressed their displeasure quite vehemently. Ethan said that his mother still didn’t agree to his choice of getting vaccinated independently but felt it was the right thing to do. He put forward the point that even though he had a strong immune system that could fight against whooping cough or any such other diseases but happened to transfer it to his kid sibling without the same privileges of health immunity, it would be a really irresponsible thing to do.

Ethan has also apologized for the way he had portrayed his mother on social media as being irrational and dumb. He realized that words and phrases can be really put out of context in social media and misinterpreted. He did not have an iota of an idea about how his post would become so viral. What he had said about his mother was mainly out of frustration and childish anger and she didn’t deserve as much criticism as was being levied on her.

His mother had her own reasons, a major one being the fact that some records show that vaccinations can cause side effects like autism as a child. Though these reports didn’t have any scientific backup, still some people believe in it. Even then his mother deserved respect and should be left alone. Ethan’s brother also wants to get vaccinations done but still has not reached to take the decision on his own.

Top Stories Tags:Teen Gets Vaccinated After Posting It On Reddit