In a recent event, GMV showcased the analytical reports of ERGO as well as ESROCOS robotic technologies. GMV is working within H2020 technology’s research cluster. The Space Research Cluster basically focuses on testing, manufacture, and design of robotic building blocks. GMV was working on various projects of SRC namely ERGO, FACILITATORS and ESROCOS since the last 27 months. 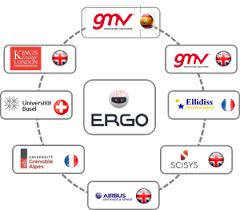 In the ERGO testing, GMV has collaboration with many European nations and is working on to create great robots which can work under harsh environment. Under ERGO, GMV had tested many robots in harsh environments which can be suitable to obtain data from various planets of the solar system and can even work in gas as well as nuclear mines.

On the other hand, ESROCOS basically focuses on creating autonomous robots and get an open source framing, which helps in providing technical assistance and in the exploration of planets. Due to ESROCOS, one can create impeccable software for space avionics. The FACILITATOR endeavor of GMV basically focuses on providing impeccable analytical data of orbital as well as planetary level.

Few other seconds, SRC projects are undertaken by GMV have got funding approval from the European Commission. In the second term, GMV has to focus mainly on ESROCOS as well as ERGO system to produce spacecraft which will be used in the orbit. GMV is also about to take endeavor to develop PULSAR, this is considered as a very large assembly robot. In PULSAR, ESROCO, as well as ERGO, is used to effectively develop a variety of complex models.

While talking to the press Mariella Graziano said that GMV has given great results in the first phase due to the SRC cluster. Mariella Graziano is the executive director at GMV aerospace. The main strength of GMV is the technical skills which it is about to use for the second phase by developing a new phase for space and technological development.